This family photograph shows John and Janet McCallum and their children at about the turn of the century. John McCallum was a stonemason who worked on the construction of the Forth Rail Bridge. His wife Janet was a typical matriarch who lived to a great age and bullied everyone in the family (anecdotal evidence from one of her granddaughters!). 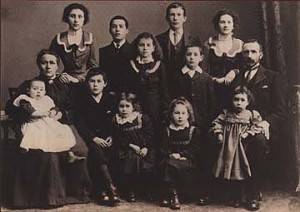 Mary Anne (back row, far left; later a Quaker convert) married Peter Williamson and had 4 children, John (emigrated to Canada and had 6 children, 5 boys and a girl), James (emigrated to South Africa), Jenny (married and had one daughter Jennifer) and Christina (married and had a daughter and a son). Peter Williamson had been orphaned at an early age and ran away to join the army at 14, giving a false age; he served in India and South Africa, and if only someone had written down his experiences they would probably make a good book. The Williamsons took in lodgers in their home in Rose Crescent, Dunfermline, and one couple, who were on the stage, left their daughter Kathleen there and never came back for her, so she was brought up as one of the family.
David, one of the McCallum sons, also emigrated to South Africa: he was married twice to sisters (Phemie and Aggie) and had a son, Robert, by his first marriage.

Jenny McCallum (back row, far right) worked in a linen factory but gave up her job in 1908 to join a Women’s Freedom League demonstration in London, where she was arrested outside the House of Commons and imprisoned in Holloway. Her story is mentioned in ‘The Auld Grey Toon’ a history of Dunfermline published by Dunfermline Libraries, and in ‘The Guid Cause’, the story of the Scottish suffragettes by Leah Leneman.

Further anecdotal evidence suggests that Jenny was involved in politics after the war: her niece (Christina Morrison, nee Williamson, b. 1918) was told that she had been dandled on James Maxton’s knee as a baby during meetings of Red Clydesiders at the McCallum family home in Brucefield Avenue, Dunfermline, and she can remember being taken to political meetings by her aunt in the 1920s. Jenny married and emigrated to South Africa where she died.

The youngest child in the family, Elizabeth, stayed in her parents’ house in Dunfermline, had a daughter, Jenny, and married her cousin Archie, who had returned from New Zealand where a previous generation had emigrated.
(Thanks to Sheila Perry)