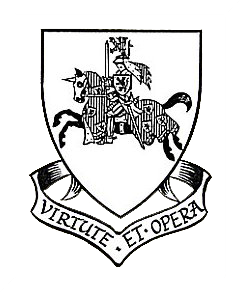 “By virtue and energy”

The County Council of The County of Fife bears the arms which are virtually the same as the device on the seal adopted by the Council in 1890.They are based on a seal of Duncan, Earl of Fife, of which a 1360 impression is on record and described as ” an armed knight on horseback at full speed, a sword in his right hand, and on his left arm a shield charged with a lion rampant which is repeated on the caparisons of the horse”.

A royal burgh was a type of Scottish Burgh which had been founded by, or subsequently granted, a Royal Charter.  Although abolished in law in 1975, the term is still used by many former royal burghs.

The earliest burghs date from the reign of David I (1124-53). He introduced feudal tenure into Scotland and encouraged the growth of towns as a means of fostering trade and increasing crown revenues. The burgh’s privileges and obligations, including trading privileges and the right to hold markets, were enshrined in a charter granted by the king or other feudal superior. In return for their privileges, royal burghs made annual payments to the crown of the rents of burgh properties and the customs of trade. Later this became a fixed annual sum. Any surplus money was paid into the ‘common good fund’ for the benefit of the burgh.

At first the burghs were governed through the burgh courts, originally a gathering of ‘all the good men of the community’. Gradually the burgh court meeting in a judicial capacity came to consist of the bailies only, while the town council (provost, bailies and councillors) attended to the administrative business. The merchants dominated the magistracy of the towns as the royal charters of trading privileges were in effect charters to merchants as they brought in the largest part of the burgh revenues, the burgh customs.

Different types of burghs exhibited a wide variety of systems of government, until 19th century legislation imposed uniformity. The 1833 Burgh Reform Act also swept away the corruption of self-perpetuating town councils by introducing elections for town councillors. Royal burghs still retained certain privileges, including their own registers of sasines, but in the 20th century all except the largest lost some powers and functions, mostly to the county councils. (National Archives Scotland)

Royal burghs: those given their privileges directly by the Crown. They acquired a monopoly of national and foreign trade.

Burghs of Regality: burghs created by Crown vassals who had been given the Crown’s rights over a given area.

Burghs of Barony: granted their charters by barons or churchmen.

Police burgh: the Burghs and Police (Scotland) Act 1833 allowed inhabitants of royal burghs and burghs of barony to set up police commissioners. This was extended to parliamentary burghs in 1847.

another useful site about Scottish burghs is at Scan
If you are interested in heraldry and all things like it visit Heraldry of the World  a mind blowing amount of work to make this site.